In Mutants, 1-4 players mix and match genetics to create the ultimate warriors and demonstrate their prowess in the arena. By dominating the arena and freezing the most valuable mutants, you gain Victory Points - and whoever gets most of them wins.

The game is also has a solo mode called Uprising. You win Uprising if you defeat epic and unique bosses. Instead of racing to Victory Points, you will try to whittle down the health of your opposing boss!

2313 AD, thanks to the progress of genetics, making can create mutants to fight as genetic gladiators in bloody arena battles. Only humans with psychic abilities can control and lead them to victory. These "Psy Captains" all share one ultimate goal: to win the most prestigious and dangerous competition in the galaxy, the Mutants World Tournament!

In each round, players take turns until all players have used every card in their hand. At the end of the round, the player whose token is closest to the top space of the arena track scores Victory Points based on the round track. The game proceeds in this way for five rounds, after which players reveal their archives and gain additional prestige based on the freeze value of the mutants they have placed there.

On your turn, you perform three steps.

Players looking for an even richer experience with more Mutants, combinations, and Solo mode Bosses to fight, can expand their game with these expansions! 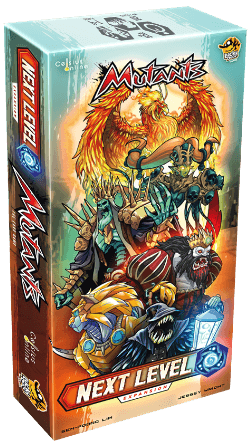 Next Level adds an additional Solo Boss, a new set of Basic Mutants, and two modules that you can incorporate into the game. Heroic Mutants are super powerful mutants that replace some of the Advanced Mutants you would normally have in your Gene Pool. Orbs can be used to give an extra power boost to players that land in the Dread Zone, so they can fight their way back to the top of the Arena. Second Wave Basic Mutants give players the ability to choose their starting deck. Finally, the Zombie Horde is a Solo Boss that's designed to challenge even the most experienced Psy Captains! 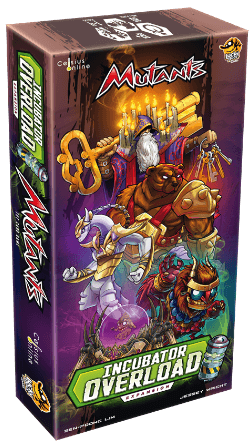 Incubator Overload gives you access to more mutants, so you can create thousands of amazing new combos! It also includes the Buildings expansion module, which alters the game's rules and provides new challenges for you to face. Finally, Heimdall and Glubber have risen and are threatening to destroy the facility! Rally the troops and pit your best mutants against these Solo Bosses in battle!

Deep Freeze brings even more mutants to the arena for you to use in battle! It also includes a Psy Captains expansion module to boost your combos to truly epic level!

The Dice Tower - Seal of Approval

Stay up to date

Breed your strongest mutants for battle and step into the arena!

You are about to change currency - this will clear your basket. Are you sure you want to proceed?

You are about to change language - this will clear your cart and change the currency. Are you sure you want to proceed?